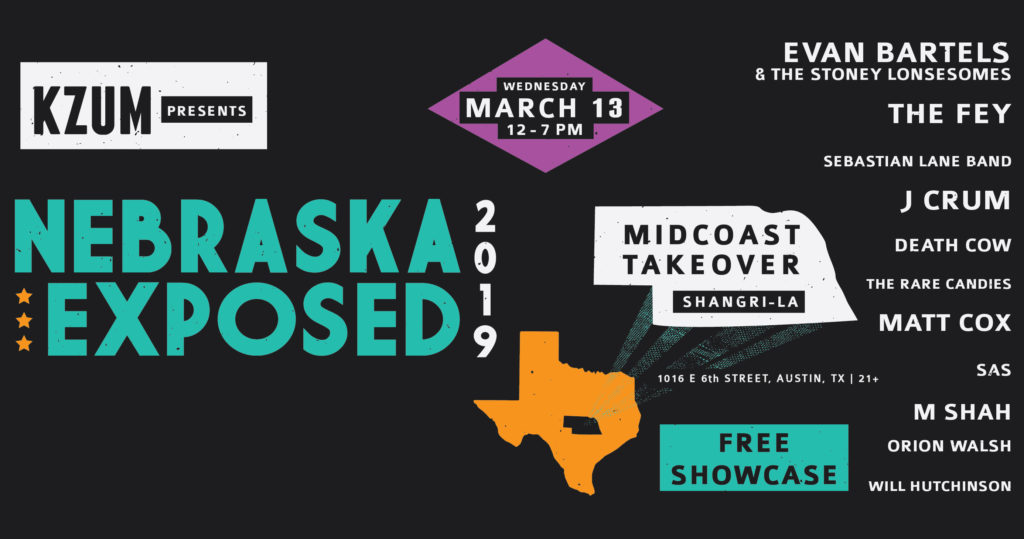 On March 13, 2019, the fourth annual Nebraska Exposed showcase joins the Midwest Music Foundation’s annual four-day, two-stage event, MidCoast Takeover in Austin, Texas. The partnership with the Kansas City organization will take the annual showcase off of 6th Street, the main drag for most SXSW festival goers, to the east side of downtown Austin. The move to Shangri-La, home of MidCoast Takeover since 2012, will allow Nebraska Exposed the opportunity to reach an even larger audience as East 6th Street is home of many free day parties and unofficial SXSW showcases.

Midwest Music Foundation celebrates its 10th anniversary bringing Kansas City artists, and performers from surrounding states, to Austin during the city’s annual international festival. Their showcase aims to reflect attention on the vibrant music scenes in Kansas City and throughout the Midwest.

Nebraska Exposed has shared several artists in recent years off their bill with Midwest Music Foundation, such as High Up, Universe Contest, See Through Dresses and more having performed on their outdoor stage.

“While our last venue, Cheers Shot Bar, were great hosts for the showcase, it placed a lot of physical and mental demands on our bands. Being located in the heart of downtown, they would have to walk their gear for blocks, down alleyways, up flights of stairs, and then go and find parking. All to tear it down, and load out after just a 30-minute set.” said Shannon Claire, KZUM’s development director. “Some bands would park up to 25 blocks away to avoid the high parking rates and/or limited availability. There isn’t really much compensation, if any, for this kind of gig, so I’m really excited that we can guarantee an easier set up for the performers.”

“We had an overwhelming amount of applicants this winter,” said Claire. “It was great to see all the interest, but definitely didn’t make it easy for the selection process.”

A fundraiser for Nebraska Exposed will be held on Friday, Feb. 22, at The Zoo Bar at 8 p.m.. Evan Bartels and The Stoney Lonesomes, along with The Fey, will perform. All proceeds from the door, and scheduled raffle, go to support Nebraska Exposed and the artists.

Nebraska Exposed 2019 artists were selected through an online application process

For further questions about Nebraska Exposed 2019, email us at development@kzum.org.