It was a chilly night in Lincoln for Gregory Alan Isakov’s return to town, and I know for a fact that the cold kept a couple of people away from the show. However, that didn’t stop The Bourbon Theatre from being jam packed.

Doors opened at 7 p.m. and music was set to start at 8 p.m. with Danny Black, otherwise known as Dan Schwartz of Good Old War fame. The full band was originally scheduled to play with Isakov on this part of his tour however, for undisclosed reasons, had to back out of this leg. Long time Good Old War fans were surely disappointed when the news broke, but that quickly washed away once Black started playing.

I wasn’t quite sure what to expect from the solo act, and I certainly didn’t get what I expected. I knew from my time listening to Good Old War that Black is a talented guitarist capable of navigating some difficult vocal harmonies. What I didn’t know was that he is a master of the guitar. Black’s solo work is all instrumental.

When he took to the stage, he told us that he was going to take us on a couple of adventures, an allusion to his solo album Adventure Soundtrack. And that word, “soundtrack,” captures so much of what makes this performance so incredible. Through the use of four or five different guitars, a loop pedal, and maybe two sample tracks, he delivered on his promise of taking the audience on a couple of adventures. His mastery of not only guitar, but every single string, evoked visions of a real journey. His music is a score for a movie that doesn’t exist yet, and I hope to see him associated with that kind of work in the future.

After a 40 minute set from Black, The Bourbon crew got hard at work to get Isakov ready to go and he and his band took the stage by 9:20 p.m., keeping the momentum going. Whatever room had been open on the floor was quickly filled in with people that were excited for the show. Fans of Isakov know that he was in Nebraska just a few months prior in Omaha. It seems Isakov was cognizant of that as well as the set list differed quite a bit from what I had seen at that show.

If Black has a mastery of guitar and visual journeys, Isakov caps off the experience with a mastery of mood and composition. He and his music have this remarkable ability to slow everything down and bring everyone a little bit closer; both metaphorically and literally. As his music starts, romantic couples wrapped their arms around each other; patrons put their phones away and everyone was sharing in an incredible experience.

His set included a lot of songs from his 2018 album,  Evening Machines, as well as a decent amount of songs that appeared on his album Gregory Alan Isakov with The Colorado Symphony. This allowed a wide net to catch the ears of all of the different kinds of fans. He commented at one point, “thank you guys so much for being here tonight and for yelling out songs. You know, we don’t really have any big radio hits, and it’s super cool to hear what everyone’s favorite is, because we have our own little fan group.”

Isakov and his band added to the intimacy of the experience by unplugging and flocking to the front of the stage. The entire band played with one microphone between the six of them. Isakov commented that this is something they don’t always get to do, because it’s not always quiet enough to play those acoustic songs, so it really felt like a treat; something that we would get to see again after the encore.

I have seen Isakov in concert three times now and this was the best of the three, in my opinion. He is such a down-to-earth guy and his musical genius is hard to describe in words, but he has connected with so many people and that profound impact was present in the room. I have never been to a concert where the audience was so captivated by sound, and I am so grateful to have been present.

It is a packed show here at @thebourbontheatre for @gregoryalanisakov. 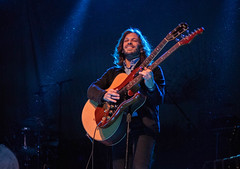 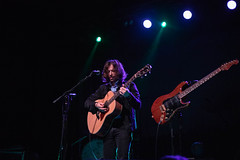 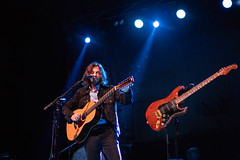 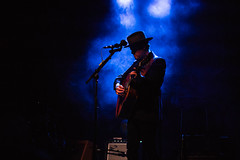 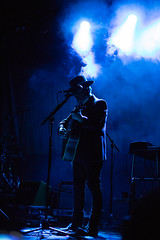 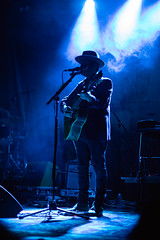 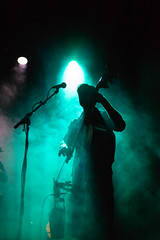 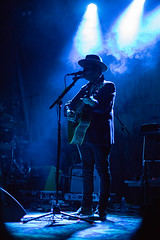 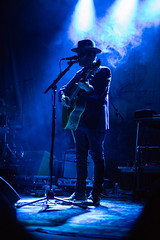 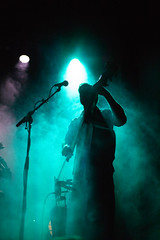 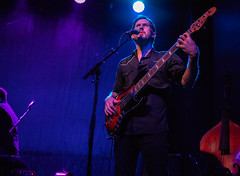 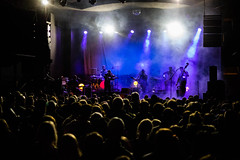 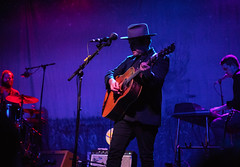 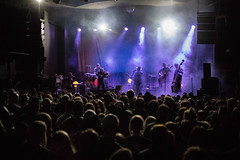 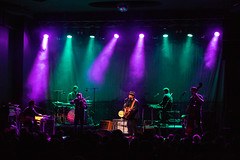 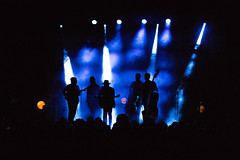 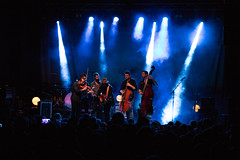 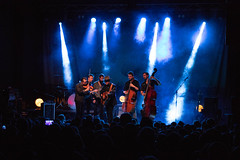 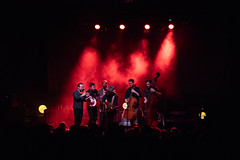 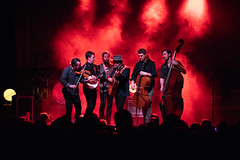 Stephanie Paul is a multimedia intern with KZUM. Steffan Decker is KZUM’s multimedia specialist and co-host of The ISM Machine, 6-8 a.m. every Monday on KZUM, where you can hear plenty of Gregory Alan Isakov and Good Old War.